The Ice Storm of 2013 has come and gone. The freezing rain tapped angrily against my window all night and kept me awake off and on until dawn. When I awoke groggily in the pitch dark to get Zachary to an early hockey game, it looked like a fairyland outside. All the power lines were coated with thousands of tiny frozen droplets and the trees looked as if they had been painted with ice by an indulgent artist

Unlike thousands and thousands, we did not lose power. Even though I was ready for at least 48 hours of blackout if necessary, it turns out that it was not. Between the ice storm raging all last night and the hives that are keeping me up night after night with the itching, I am not sleeping very well.

By the time Zach and I got home from hockey I felt backed-up with fatigue. I informed the household, including my poor hubby who is suffering horribly with pneumonia, that I was closed for business, off-line, and unavailable. With my pronouncement clearly communicated, I lit all my beeswax candles and settled on the living room couch with my Kobo.

The kids were in the ‘man cave’ playing video games when we lost power at around 2:00 this afternoon. It is always such a shock when the power goes out. There is this sudden realization that we are absolutely and completely dependent upon electricity to cook our meals, boil our kettles, read our books and play our video games. Being the adaptable creatures that they are, though, the kids quickly found things to keep them busy on the third floor and the house went quiet.

As I lay in the welcome quiet I realized that it was not just any old kind of quiet. It was complete and utter silence. No hum of the refrigerator, no low level vibration of the lights, no furnace whooshing on and off at indeterminate times, no TV blaring, no music, no kettle bringing yet another batch of water to the boil. 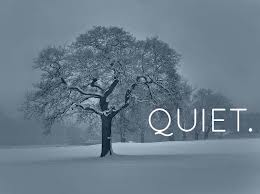 As easy as electricity makes our lives and as much as we depend on it, I have to admit that I was disappointed when the power was restored thirty minutes later. The furnace came back on with a roar, the printer beeped and whirred loudly, the kettle picked up where it left off, and so did the television.

Well, for thirty blissful minutes I got to bask in the Sound of Silence…and it was truly heavenly.