When I went to bed last night we were under a Snowfall Watch. The Weather Network was predicting up to 25cm of heavy snow and high winds. As I tucked my boys into bed they were already planning their Snow Day activities; sleeping in, video games, shinny in the park, shovelling, and movie watching. They were pumped for an epic Snow Day. 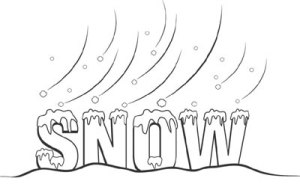 And, truthfully, so was I.

In anticipation of the Snow Day, I had already cleared my calendar. I ran workshops on both of last winter’s Snow Days and I was planning on really relishing this one.

I awakened at 5:30 this morning to a beautiful-looking blizzard outside my window. I decided to start the Snow Day reading in bed with a cup of tea to await the announcement of the school closures. It was supposed to snow and blow all day so the announcement was really just a formality.

Well, much to my surprise, and my children’s disappointment, at 6:30am the board Tweeted that school buses were running and all schools were open for business. Oh man! It is hard enough to get my sons moving in the morning on a regular day. This morning was something else again. If their faces had been any longer over their French Toast, they would have gone to school with maple syrup beards.

After dropping the boys, I headed to the gym for the 9:00am Kick Boxing class. As I was strapping on my running shoes I decided that even though the school board had sabotaged the Snow Day for the boys, there was no reason that I couldn’t take one.

And so, I decided that I was going to play hooky!

After my class (which almost killed me!) I headed to the local video store (do we actually still call them that…?) for the ‘chick flick’ that I have been dying to watch. We bought a big screen television for the family for Christmas and I think that I have watched it a sum total of twice. I am not a fan of TV and I don’t watch hockey, football, or play video games, so my opportunity to enjoy the new TV, and my chick flick of choice, is extremely limited. I decided that today, with my house empty of men, I would remedy my dearth of new TV time.

The only problem was, when I sat down to start my movie at 11:00 this morning, I suffered a nagging pang of self-doubt and a good dose of guilt. 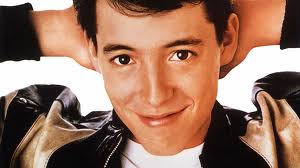 Playing hooky isn’t actually as easy as it sounds. In high school, there was always an accomplice. Someone to enhance the danger and the fun. Someone to convince you that you had made the right decision to ditch school and to help make the day awesome. Ferris Bueller certainly comes to mind as the very best accomplice of all time! Today, however, I had no Ferris Bueller at my side. It was just me to take all the heat for being so rebellious and breaking the rules.

It didn’t take me long to push the nagging voices away and settle into my very weepy and completely lovely movie. And afterwards, to top it off, I indulged in a luxurious Epsom Salts bath to soak my Kick-Boxing muscles. What a shameless hedonist I am becoming!

Well, I didn’t do anything quite as epic as singing Danke Shoen from a parade float today. I did, however, manage to elude my own version of Ed Rooney. I resisted the voice in my head that was nudging me to buy into the fact that I was a bad girl. Instead, I leaned into and loved every minute of my day.

And, truly, for me, that is a Radical Act.

Maybe I’ll brush up on Danke Shoen…just in case I need it for next time! 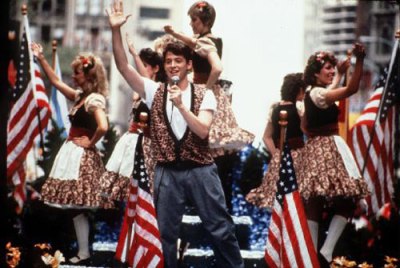 2 thoughts on “The Radical Act of Playing Hooky”